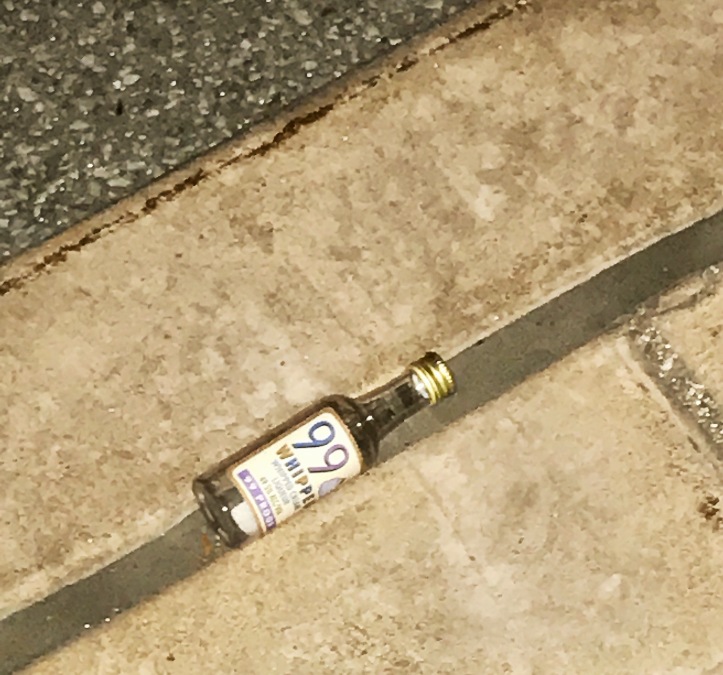 This has been on the sidewalk outside the hospital for four days now. I know I should pick it up and throw it away, but now it has become a fascinating thing. I have wasted a lot of time pondering this situation. Maybe I just need a distraction.

How long is it going to stay there?

Why is no one else freaking out about this random empty liquor bottle?

Who threw it down? Why not just throw it away?

Who actually wants to drink this cheap, disgusting stuff?

Did they take a nip before entering the horror of the hospital? Did they need some liquid courage to enable them to walk through the doors and face their worst fear?

Did they need a shot after walking out to allow them to shake the overwhelming pain they experienced within the walls?

Perhaps they are just an alcoholic who carries around single servings of vodka.

Did they enjoy it? Is this the only one they had? Oh my god! What if they drink all the time and they are driving? That would be terrible!

Who drinks outside a hospital?

Can you really blame them? Hospitals are horrible places. No one likes going to the hospital. Well, no one sane.

I know! I should pick it up and throw it away. To be honest, I really don’t want to touch it. It seems gross just there on the ground. Someone may have dropped it in disgust. What if there is something toxic on it?

Besides, if it stays there long enough it has earned the right to stay there.

Folks, do me a favor. Don’t throw your empty liquor bottles on the sidewalk outside the hospital. It gives me entirely too many things to process.